E3,  the annual event where the big guns are brought out and cheers of nerds fill LA Convention Centre. I was not planning on streaming it but my friend was watching it so I thought I would join her just because. AND OH BOY was I glad I did.

Because of the announcement of KH3.

The moment we saw DISNEY flash across the screen, we started flipping out. Too many feelings, man. jkagdkasdjf

Basically after the Sony press conference, I was like, OK, Sony wins, everybody go home.

Kingdom Hearts is a part of my childhood. I’ve been a fan for 10 years. And… I believe it’s the only series left from my younger days that hasn’t actually come to a conclusion like Harry Potter and Fullmetal Alchemist. Remember those times when some series you followed for a long time was over and you would go, “My childhood is overrr….” Well. My childhood is still here, because KH3 is here, and KH is fun for all ages!

I admit, I like KH more than I like FF, mainly because I have followed the series since it’s inception. So… I’m not as excited for FFXV as I am for KH3.

I wonder how the new KH theme song is gonna be like since Utada Hikaru isn’t going to be in the picture anymore? Yuna Ito? I wouldn’t mind lol… speaking of her, where is Yuna Ito …

Anyway I drew KH fan art. I have never drawn KH fanart ever before even though I have been so into it for so many years. haha. 8)

I used a old board that still had paper I found at home. It’s pre-stretched so I didn’t need to stretch the paper. 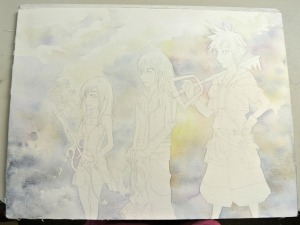 I was trying a new method of painting skies. Doing it in 2 layers instead of the usual 1 layer that I do. 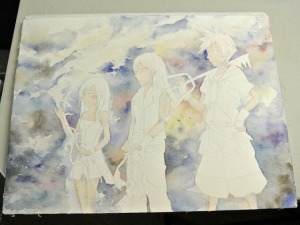 At first I wanted to draw them on Destiny Islands, then the little voice in my head was like… THIS NEEDS DURAMATIKU SUKAI.

It usually doesn’t matter which you start with in watercolour painting, but I prefer to paint backgrounds before I do foregrounds. 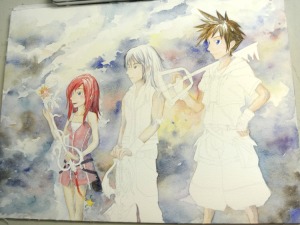 Adding the clothes in yo!

We also watched the livestream from the Square Enix booth but there really wasn’t anything interesting/informative. Basically it was an hour or 2 of Nomura saying “sou desu ne” and sniff a lot. Maybe it was raining in LA.

I am on a journey to discover my “illustration style”…  Other folks can probably see it better than I can but I have an idea though, that it is something to do with painting and making things cute… I make everything look cute. I am slowly beginning to accept my inner kawaii.

I have illustrated a mini book that was inspired by an essay I wrote about mythology and shapeshifting. I really admire those who can rock poiesis beautifully , like Maya Lin and her Vietnam War Memorial. Previously I thought people who are masters of the poetic object were people who had a lot of feelings… but the opposite seems more likely, because they are calmer and more in control of their feelings they are able to express them more poetically.

So here are some sketches! I have several pages, but I’m just showing the more interesting ones (I write down remind me to do things, like watch Rick Mercer Talks to Americans on YouTube)

I was listening to a lot of Galileo Galilei at the time, and I was having designer’s block, so I put on their album Baby, It’s Cold Outside and doodled.

時計塔 was my favourite song of the album, along with 夢に唄えば

lol idk why am I telling you this but I listen to a lot of Japanese music.

Figuring out the images and the flow of the pages. Lol I wrote Journey to the West, I think I might do book covers for those classic Chinese books, all the covers I’ve seen are pretty bad.

Cliones! Originally I wanted to draw everything in ink… 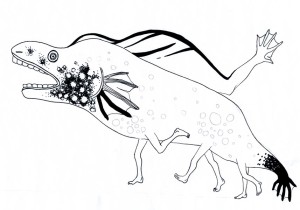 And then I realized it looked kind of weird. 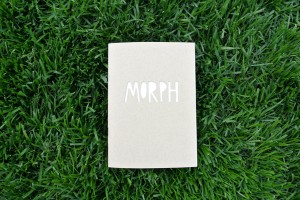 So my book is called Morph! Which is kind of a modern metamorphosis fairy tale.

The evolution of the clione image above. I kinda grew attached to this kid after I drew him so much, I named him Rory. 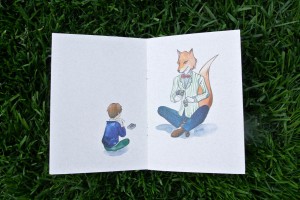 Rory is playing cards with a fox

Rory is not afraid of the eel-man. 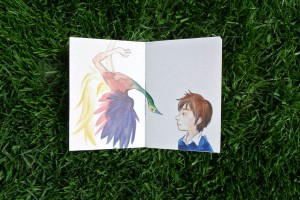 Rory is comforted the Bird King.

Rory turns into a bug.

Rory is actually a spider.

I’m thinking of doing a Morph 2… applying lessons I learned making this book. It was really fun, making the book I mean.

I also started a Ask Me Anything page. I will try my best to get back to whatever questions as soon as I can. Or you can comment too lol.

The other day I had this strange philosophical moment. I had a thought, a cluttered room is a cluttered mind. Haha, I don’t know why all of a sudden this came to my head,  not sure if distracted… or genuinely want to clear out the space, but regardless, I decided to do a major cleanup of my cave.

While I was cleaning my place, I stumbled across a bunch of random things that were quite delightful. I’ve done the bathroom and kitchen, and have progressed to the bedroom… part 1. So far I have found:

I also came across some old sketchbooks from last year when I was really into buildings and stuff, (I drew a bunch of buildings in the inner Georgetown heritage sites and made friends with cats) and also some drawings I made while I was on vacation in Bali, Indonesia. 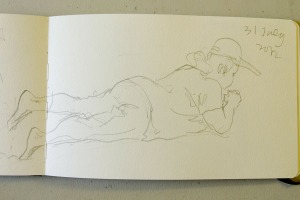 Some lady on Jimbaran Beach, also in Bali.

Me… drawing limau kasturi and some flowers. I do not recall where the plants came from. Tropical plants right? They just sprout up all over the place.

A block of pre-war houses on Armenian Street, Penang. It was over here that I made friends with a calico cat. 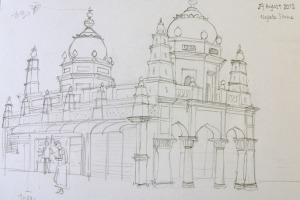 Nagore Shrine. I really enjoyed drawing this one. I got to drink ginger milk tea.

The view of some houses from St George’s Church, also Penang. 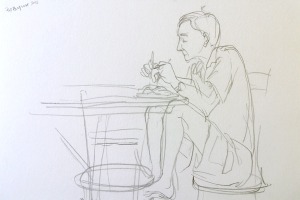 Some ah pek having his lunch in a coffee shop.

After I stopped working, I also did some paintings of a coffee shop on Stewart Lane as well as the infamous Lorong Selamat Char Koay Teow auntie.

Stewart Lane! I think the pigeons are the best part of the painting.

I sold this painting at Tesoro. *v* THANK YOU PERSON WHO BOUGHT THIS. Even though I didn’t really get any money out of it , but at least I was able to sell for a good price. All proceeds were donated to our Grad Show fund!

For those who are new to the Penang street food scene, Char Koay Teow is a kind of fried flat rice noodle dish which is really popular here, Lorong Selamat (literally means… Selamat Lane) is where of the most famous CKT stalls are. The old lady who makes this is quite notorious for… her temper, she has gotten onto Internet flame wars before, lol. but dayuuummm she makes a fine CKT. *v*

I also got chased out of her shop because there were customers from Singapore coming over and I was “taking up space” by sitting there and drawing her. Even though I bought her crazy expensive char koay teow every time I visited.

That’s it for now! I might find more gems as I continue on my room cleaning adventures.

So since I am attempting to get back into the painting game… I’ve decided to delve into one of my guilty pleasures…. painting anime-esque things.

After a semester of making furniture and home accessories it’s nice to unwind and watch back to back episodes of Shingeki no Kyojin… which is my newest obsession. (Finished the manga in 1 sitting, OMG THOSE GIANTS. how to not root for the people? You really feel sorry for them, ok… with their 3D maneuver gear.)

So here are some progress pictures.

I had some leftover paper from one of my old boards. (For small works like this I’m too lazy to stretch paper and stuff, so I buy pre stretched boards lol)

This was a poor piece lonely piece of paper that wasn’t stretched but I didn’t want to waste it, so I use to draw this kind of random things.

Multi-coloured hair is coming back in anime, ok. For a while it was all like… brown/blonde tones. Colours you can get in drug store hair dyes.

NEON HAIR IS BACK. 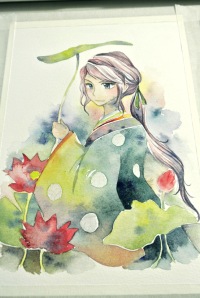 And the finished piece…..

OK ITS LIKE A COLOUR EXPLOSION. I tend to be like… LET’S MAKE THIS THING THIS COLOUR. And then I add a whole bunch of other colours to it because I get bored… and then I think it looks too colourful. -3-